Branch No 10 opens in Manchester 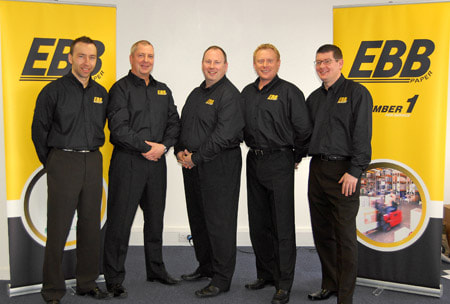 March 2007
Our announcement in September of Elliott Baxter's expansion northwards gathered momentum on 1st March with the opening of their Manchester branch (EBB's tenth). According to Tim Elliott, this is just the next phase in EBB's longer term plans, to continue to grow their presence throughout the UK.

David Tennent, Director for the northern branches, feels the new Manchester branch has what it takes to become a major player in the region, mirroring our success elsewhere in the country. "Elliott Baxter's philosophy of basing everything they do around offering customers the best levels of service available in any of the areas, in which they operate, is exactly the foundation that we will build on in Manchester. We want to provide customers with peace of mind at every stage of the process. We certainly do not believe in dictating what we think is best for the customer, we will base all our decisions on our customers needs."

Tennent and two of his colleagues have already had a taste of life at EBB, being based at our Birmingham branch since the start of December 2006. Andrew Whitworth comments, "In a way it's like going back to the owner/MD operations at the old Bunzl Group. After seeing the trade change over the years to become dominated by the large conglomerates, it's particularly satisfying to be working for what definitely feels like a family company, whilst at the same time having the resources of any of our competitors. The flexibility of working at an independent merchant gives us scope to tailor our offering to what is required locally."

The Manchester branch will service the North West region and Sheffield initially. EBB Manchester's 25,000 square feet of warehouse space on Trafford Park holds a stock capacity of around 2,500 tonnes enabling daily deliveries in excess of 200 tonnes. Logistics chief, Dave Murphy, has worked closely with his colleagues to ensure the service they offer maintains EBB's position as number one. "We have studied our target areas exhaustively and will extend exceptional service levels to all those customers. We have no intention of going gung-ho and over-stretching our resources. Our strategy is to start on a tightly focussed area and, as customer demand requires it, expand our offering."

It is testament to this commitment to service that all Manchester senior staff and external sales people will be provided with a pick-up as a company vehicle. "We have no prima donnas here" said Murphy, "if someone needs a delivery out of the norm, we have access to these vehicles which can each carry over a tonne".

Service doesn't only centre on deliveries though and we have recruited a team full of experience to provide their customers with total confidence whether ordering a box of Conqueror or ten tonnes of Satimat.

Managing Director Tim Elliott said: "This is a very exciting time for all at EBB, and demonstrates our commitment to offering a genuine alternative to our major competitors on a nationwide scale."